In a search to replace several NetGear WNCE2001 devices which had over time, proven themselves to be so unreliable they would literally kill entire wireless AND wired networks by randomly hijacking DHCP. I tried many devices — some either couldn’t bridge at all, others ‘worked’ but had such terrible range or connection quality they were practically useless, others were simply too large, the list goes on.

Almost ready to give up on the project, I discovered the GL-MT300A – a tiny Linux / OpenWRT powered cube for around $35.   The list of built-in features is impressive.   But I need it for only one thing – a small, USB powered wifi client-mode bridge. 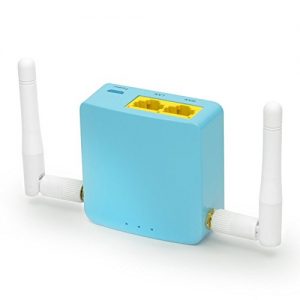 I had high hopes – given the fact it ran OpenWRT along with the LUCI web interface – that I’d be able to do practically whatever I want through a nice GUI.

Unfortunately I was unable to create a working bridged repeater setup due to a limitation in this particular (MediaTek) hardware.   Apparently, only Broadcom hardware can natively bridge between wired and wireless networks.

With some google-fu, I discovered an open-source ‘software fix’ for this hardware limitation called ‘relayd’.   It’s available through the built-in package manager and can be installed with a few clicks.

Here are the resulting specifications:

I attribute the following steps to more detailed information gathered here and here, adapted to the firmware and GUI on this particular hardware:

At this point you can plug into the WAN port and receive a DHCP IP from your primary router, as we expect in ‘bridged repeater’ mode.  Relayd handles the broadcast/DHCP traffic exchange between your wireless network and the WAN port.   If you plug into the LAN port or connect to the WIFI hotspot (routed repeater), you’ll receive an IP in the 192.168.8.x range from the GL-MT300A’s built-in DHCP server and your traffic will be routed using NAT.

I’ve found using the LAN port (or WIFI hotspot) is an easy way access the GUI to change WIFI networks or other settings since the management IP will always be 192.168.8.1.  NOTE: You can access the GUI on the upstream network or WAN port by going to the WWAN’s IP address in your browser.   However keep in mind the WWAN IP is assigned by DHCP, so you should consider using a static DHCP reservation upstream.

To change the WIFI network just repeat step 3.  I’ve discovered that the device will remember all network connections and automatically connect to to the best available, and you can edit the list in the basic GUI as well.

To manage the hotspot, go into the standard GUI and toggle the ‘switch’ to enable/disable or click on the WIFI icon to change the settings.   NOTE: Disabling the hotspot causes latency and packet loss due to a bug in the custom firmware, which constantly tries to ‘bring up’ the disabled interface.  Killing off ‘gl_health’ fixes the latency and syslog errors, however, the wifi client will no longer auto-connect which basically renders the device useless.

One other thing I’ve noticed is the device regularly ‘phones home’ to gl-inet.com and several other sites for firmware checks and dynamic DNS service.   There is no way to disable this in either GUI nor in any configuration files.   To stop the unneccesary requests, you can chmod ‘000’ the following files using SSH to prevent their execution:

Lastly, it should go without saying: the firewall is completely disabled so this should ONLY be used in trusted, private network environments.   NEVER allow this configuration to be openly reachable from the internet (e/g using as a travel router) without re-enabling the firewall and carefully setting up the rules.   I use these only in private/trusted networks so I haven’t spent time on firewall configuration testing.